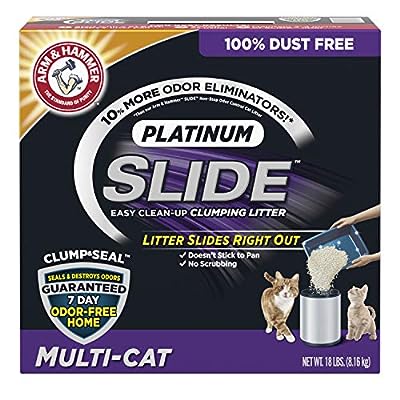 Price: $15.99
As of 2021-09-10 01:02:41 UTC (more info)
Product prices and availability are accurate as of 2021-09-10 01:02:41 UTC and are subject to change. Any price and availability information displayed on https://www.amazon.com/ at the time of purchase will apply to the purchase of this product.
Availability: In Stock
Add to Cart
Buy Now from Amazon
In Stock.
Product Information (more info)
CERTAIN CONTENT THAT APPEARS ON THIS SITE COMES FROM AMAZON SERVICES LLC. THIS CONTENT IS PROVIDED 'AS IS' AND IS SUBJECT TO CHANGE OR REMOVAL AT ANY TIME.

Patented EZ clean technology that slides out of the pan, no scraping, no scrubbing Powerful odor eliminators combine with the power of Arm & Hammer baking soda to destroy sealed-in odors Platinum formula has 10% more odor eliminators than our Arm & Hammer slide non-stop odor control cat litter Clump & seal technology forms an odor-containing seal around urine and feces Designed to control odors in homes with more than one cat

There are no customer reviews yet. Be the first to Write a Review!

Cookies help us deliver our services. By using our services, you agree to our use of cookies. Learn More Accept

Wait! We have something for you...

Don't leave empty-handed! Simply enter your email below and we will send you a great discount on our products:

We hate spam as much as you do! Your details are never shared and you can unsubscribe at any time.